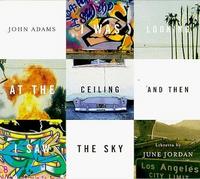 Classical composer John Adams does a musical. I Was Looking at the Ceiling and then I Saw the Sky wasn't really billed as such, but that's what this was. A look at class and race clashing in LA (I didn't realize it until now, but it's kind of a musical version of the same story the film Crash tells), the musical was done as a special performance originally, and only got recorded because of the prominence of Adams' name and some of the names singing on this recording--including Audra McDonald and Marin Mazzie, relatively big names in the musical theater world.

The music is odd at first, but it slowly seeps into your pores. The opening title number is easily my favorite, with its pulsing, minimalist, synthesized long intro and the wonderfully spiky harmonies in the chorus. The second song is another favorite, with its very poppy, catchy, hook-laden chorus of repeated women's names (the song is sung by a woman to her lover chastising him for his many side-lovers). The story itself (and I only have the recording--I've never seen a production), seems a little heavy-handed, with one song in particular -- "Mike's Song about Arresting a Particular Individual" -- almost comical in its cop-arresting-a-black-man spoken-sung diatribe. But the music and the singing makes the disc worthwhile, especially since the story becomes somewhat secondary on CD as opposed to in a theater anyway.

Until Whenever
Hand-crafted in a rough-hewn oak cabin by Tosy And Cosh at 2:36 PM