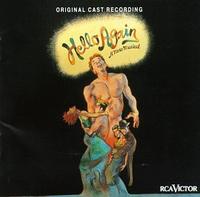 Michael John LaChiusa may be a bit arrogant, as his recent diatribe against the current state of musical theater ("The Great Gray Way," in Opera News) and the ensuing battle of words that ensued in print between him and one of his targets, Hairspray composer Marc Shaiman, suggests, but he does write some wonderful music. I like the light entertainment side of musical theater just fine, but would hate to see it overtake completely the more serious side epitomized by musicals like West Side Story, Sweeney Todd, Assassins, and the current The Light in the Piazza. And as far as contemporary serious musical theater composers go, LaChiusa is easily at or at least near the top of a very small class.

Hello Again was my first exposure to LaChiusa's work (it was, I believe, his second full-length musical to be produced, after First Lady Suite, but the first to be recorded). The structure of the musical, lifted from Arthur Schnitzler's play La Ronde, is simple and effective--the first scene is of a prostitute seducing a sailor in the early part of the century. In the next scene, the sailor character reappears, this time seducing a nurse in a later era. In the third scene, set even later in time, the nurse seduces a college boy. And so on. Each scene is musicalized by LaChiusa, and the conceit of time jumping allows him to play with different musical styles--80s dance-pop, music hall ditties, swing, etc. But what makes the CD work so well is how he is able to in these short vignettes musically really into these "typed" characters. So by the end of the first scene, for example, we really feel for the prostitute, she's become more than a simple type, and this is done primarily through the music. That first scene, "Hello Again" is one of the score's best, with a simple haunting climbing figure introducing the play and the prostitute with a weary meloncholy. The score is also refreshing in that LaChiusa refuses to dumb down the sex. There are some pretty funny dirty lyrics and some awkward sex scenes, all set to music--the musical can be squeamish about sex, so it's nice to hear one that isn't. The beginning few and final few scenes are disproportionately strong, and so the middle of the disc can drag a little. This is more than just a minor quibble, especially considering just how strong songs like "Hello Again," "Tom," "Mistress of the Senator," and "The Bed Was Not My Own" are. Still, this is a worthy CD of any serious musical theater collection, and a fine introduction to the prolific-by-today's-standards LaChiusa.

Until Whenever
Hand-crafted in a rough-hewn oak cabin by Tosy And Cosh at 4:06 PM