The U2 Canon - October 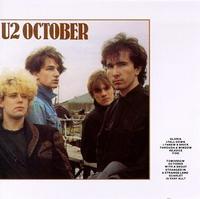 Continuing my song-by song stroll through the U2 discography, we turn today to 1982's October. Many a U2 fan (but not nearly all) considers this to be the least of their albums, and I'd more or less agree. Like on Boy, this is a still-young band developing and discovering their sound, and is not quite yet the work of "mature" artists. It's pretty much the only U2 album to make any kind of extensive effort at including traditional "Irish" instruments, a move that has its moments but in the end doesn't quite work for their music. Still, it's hardly an unworthy effort. Bono's singing hasn't yet graduated to the more full-voiced roar he would employ in later years; he's nowhere near the singer he will become. However the Edge's guitar work continues to evolve, and he's here really starting to nail down certain elements of the signature Edge sound. The album, like its predecessor, does do a very good job of maintaining a tone throughout, a slightly melancholy, autumnal tone that does justice to the title.

Gloria--U2's much vaunted and pored over status as a "Christian band" gets a workout here. The lyrics, while they weren't quite so to my somewhat oblivious teenaged self, are pretty clear: "only in you I'm complete" isn't a line about a girl, and the Latin stuff pretty much tips off the whole thing. For a song about Jesus, though, it rocks quite nicely. Musically they've more or less continued in the Boy vein, although the sound is a bit fuller and the deepening and maturing of Bono's voice has, if only barely, begun. I love Adam's adept little bass solo in the break, and the briefest of Edge solos that leads out of the bridge from that solo.

I Fall Down--October features a lot more piano than its predecessor, and if none of it is, shall we say, virtuoustic, it's still pretty and serves the songs well, as in the intro here. Hints of future more heavy and distorted Edge guitar lines peek out of the chorus, and Bono begins to play with a rougher, more overtly "rock voice" in parts.

I Threw a Brick through a Window--A mild hint of funk teases into the guitar riff here, with the U2 hallmark of having the verses be dominated by a driving bass line with only stabs of guitar, as opposed to full strumming or other backing, showing itself strongly. The adolescent rebellion lyrics are, already, starting to chafe and feel a bit forced.

Rejoice--Completely classic U2 riff, a bit of U2 DNA. Another more overtly religious song, with some well-meant but nonetheless trite stuff about "changing the world in me."

Fire--Almost halfway through the album and still not a ballad in sight. This more mid-tempo song could have been a Boy outtake.

Tomorrow--Ah, there's the ballad. An Irish instrument, with a bagpipe-like sound sets the tone, and the bass alternates between notes like a foreboding metronome. At the end they pick up the tempo and volume, an old trick, but one they hadn't trotted out as of yet. Perhaps the theme of U2's music gets highlighted in this song. It's a theme that will reappear in song after song, that of the pull between wanting to be joyful in Jesus' imminent return, and in his glory, and anger at the state of the world as it is, anger that he hasn't yet returned. The "Won't you come back tomorrow?" refrain has hints of both that joy and frustration, and it's an impressive balance for such a young band to pull off, all the more so given how well the music captures that ambiguity too.

October--A U2 classic, a gorgeous piano ballad, with lyrics only at the very end. Sure, it's a ridiculously simple piano ballad (how do I know? Because I can play it; and I don't play piano), but effective nonetheless, and wonderfully evocative of the month its title spells out.

With a Shout--Back to the religion well. "To the side of a hill/Blood was spilt/We were still looking at each other/But we're going back there/Jerusalem/Jerusalem" A spitfire of a song, with a driving, unrelenting bass line, and some stellar guitar work from the Edge pushing the song forward. U2 would never really get this explicitly religious again, with lines like "I want to go to the foot of Mount Zion/To the foot of He who made me see."

Stranger in a Strange Land--A moody song, with a great bass line riding up and down the scale like a man riding a bull and trying not to get thrown. Bono is in specific, character-based, storytelling mode, a lyrical style he rarely uses, and for good reason. While other story-focused songwriters can get a lot of detail into a song, and make the story at least somewhat clear (Bruce Springsteen), Bono lacks the discipline, so the song remains just hazy, with details that don't really add up to a clear picture.

Scarlet--The song that feels like the closer, with its martial drumbeat, it's quiet piano, and its rolling bass line. A beautiful and underrated U2 song.

Is That All?--The band roars back from the false ending with a fiery riff, one they would use live as the intro for Boy's "The Electric Company." The too-simple lyrics come off as empty instead of profound, but the riff and driving pulse of the song make up for them.

Until Whenever
Hand-crafted in a rough-hewn oak cabin by Tosy And Cosh at 3:15 PM