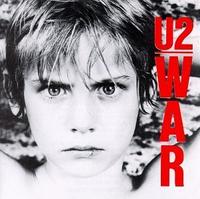 A lot of hay has been made, both within the critical press and within U2 fandom, about what a departure, or more specifically, a return to classic form, the band's last two albums, All that You Can't Leave Behind and How to Dismantle an Atomic Bomb have been. But what often gets forgotten in all of the talk about U2 switching styles dramatically, as they have several times throughout their career (most notably with 1992's Achtung Baby) is that War was really the first examples of a large stylistic shift, and in many ways was one of the most striking.

Listening to October and Boy back to back, one can almost hear them as having come out of the same sessions. There are real differences between the two, of course, but the basic sound is much the same. War represented a real departure for the band, the moody, almost-punk like rock songs and mid-tempo numbers from those first two albums replaced by a more poppy, melody-driven sound married to a military beat. War remains a critical favorite today, and is often thought of as the band's first "mature" album, but for me it's always been a lesser U2 disc. True, it has supplied three U2 hallmarks, three brilliant songs that would become live staples for decades hence (indeed, two have been central figures in the band's current tour). But some of the more pop-oriented, sing-songy material grates a little for me, making the album uneven. Don't misunderstand; I like the album, quite a bit, but on the U2 scale it's never been a favorite.

1. "Sunday Bloody Sunday"--One of the all-time U2 classics. A certain top ten in my ever-shifting list of the greatest U2 songs ever, and a near- and sometimes-top five finalist. I'm always surprised to hear this album version, with the violin and the somewhat less muscular and aggressive tone than I've become accustomed to from too many live versions to count. To non-hard-core fans, this is probably one of the two or three essential U2 songs, and rightly so. What I love about is is how that deadly simple but effective riff so neatly grabs at the DNA of the song. It's a gentle, melodic figure, unlike the defining musical figures off of any of the songs from the first two albums, and it serves the song well in many a context.

The "standard" live rendition, if there is such a beast, takes off from Larry's martial drum beat and the insistent, almost angry way the Edge lashes out that simple triadic figure. Another iconic live version for me is the rendition captured in the Rattle & Hum film. Bono starts the song with a short monologue about a bombing that had just occurred that day. He then sings the entire first two verses over nothing but the Edge plaintively picking out that famous figure, with a hint of angry desperation in his voice. The contrast works beautifully when the full band comes crashing in, cashing in the anger Bono had been depositing throughout the beginning of the song. Another great live rendition happened almost by accident when the band was playing Sarajevo in the late 90s. Six or seven songs into the concert, Bono blew his voice out completely, and the rest of the concert was sung by a hodge-podge of Bono singing off-the-cuff modified vocal lines to keep the range of the songs' range down, along with an ample helping of singing from the Edge. "Sunday Bloody Sunday," in particular, gets a solo Edge treatment, nothing but him and his guitar. It's a haunting, quiet version of the song.

2. "Seconds"--An atomic war ditty, from the depths of the 80s cold war. "Takes just seconds to say goodbye." I like this song, but it is a little slight, with its bouncy, devil-may-care bass line and jingle-like melody. The contrast between the lightness of the music and the seriousness of the lyric is well-taken, but not quite as effective as I suspect the band may have hoped. The song is also notable for featuring that rarity, an Edge vocal. He sounds just like Bono.

3. "New Year's Day"--The second classic to come out of this album, "New Year's Day" is a great song that makes expert use of the Edge switching back and forth from piano to guitar. Adam's rolling bass line provides an anchor for the Edge to play from, whether he's picking out the simple but effective piano figure or ringing out chords on the guitar. We also get a taste of Bono's penchant for grandstanding: "A crowd is gathered, black and white/Arms entwined/The chosen few." The songs open dream for racial harmony is hardly subtle, but the music makes it more than a gaping cliche. And that hint of doubt within the faith that is U2's core thematic trademark appears here as well, with the closing line: "Nothing changes, on New Year's Day."

4. "Like a Song"--A throwback to the October sound, with the driving drums and hard-hitting guitar that defined the first two albums, but married to a little of that martial drumbeat that's all over this album and with more overtly political lyrics. Not a classic, by any means, but a fine U2 song.

5. "Drowning Man"--The tempo slows. An acoustic guitar strums urgently while a bass figure insistently repeats. Bono sings with a sense of tension in his voice. A kind of forgotten song, but an effective piece, with some slide guitar adding to the atmosphere here and there.

6. "The Refugee"--An almost bluesy song, with a relaxed Edge sliding around notes like a country guitarist. Bono tries for a kind of angry, stylized, sing-shout that almost works. The song also features some great pounding drums from Larry, with some of that Keith Moon manicness peeking out from under his usually more-staid sound.

7. "Two Hearts Beat as One"--The pop/dance song. It's not a bad song, but something about its too-upbeat chorus, especially against the more typical U2 verses, always struck me as off, as not-U2. And the title is too cliche for comfort.

8. "Red Light"--Is that a female back-up singer at the beginning? Yes it is. And are those horns at the end? Yes they are. A stylistic experiment that never quite hangs together.

9. "Surrender"--The could-have-been-a-contender. Mostly forgotten today, but this sounds like a U2 classic, as if it could have achieved the status of "Sunday Bloody Sunday" or "New Years Day." A ringing Edge guitar opens the song, and the riff that rides over the verses is solid. The female back-up singers sound like they're back, but still, there are some great solo lines in here , precursors to Edge's masterful "Bullet the Blue Sky" work.

10. "40" --The third classic from this album. A wonderful, beautiful, insistent song based on Psalm 40, with a resigned and yet hopeful bass line providing the foundation for the Edge to ring short bursts of abbreviated riffs out over. And Bono starts to show evidence of the phrasing and ability to invest a lyric with feeling that will make him a great singer. This became the staple U2 concert closer until the late 80s, and was resurrected this year on the current Vertigo tour.

Until Whenever
Hand-crafted in a rough-hewn oak cabin by Tosy And Cosh at 2:23 PM