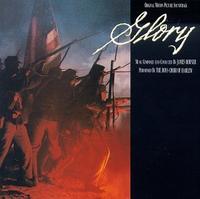 James Horner gets a bad rap, some of it deserved, for endlessly recycling musical material, both his own and others', in his film scores. Alex Ross gives him a well-done takedown in a 1998 New Yorker article (posted by Ross in his blog here), noting, for instance, that the opening theme from his score for Aliens is a direct transcription of the opening to Shostakovich's 14th symphony (the 1st samples from each of the linked albums demonstrate this nicely). And yet a few of my favorite film scores are Horner's, including Glory, a beautiful work.

Horner may have, as Ross accuses, written the main theme from Glory by smooshing together Prokofiev's "Humming Chorus," from Ivan the Terrible, and Elgar's "Enigma Variations," but, being unfamiliar with either work, I never noticed. (And I don't at all doubt Ross' word; when I first read his article I was equally unfamiliar with the Shostakovich 14th symphony; having heard it since I can attest that the Aliens theme is a direct swipe). Horner also gets a wonderful, and very appropriate sound, from the Boys Choir of Harlem, who appear extensively throughout the score. The end-of-the-day point for me is that this music is beautiful, regardless of the source, full of stirring marches, elegiac choral lamentations, and sweeping romanticism. As John Williams taught us nearly 30 years ago, with his landmark Star Wars score, romantic pastiche can work very well when handled right, and for my money Horner handles this material very, very well, regardless of how much of it is, in fact, his. After all, the line between homage and thievery is exceedingly thin. There's a moment in Williams' ET score that reminds me very strongly of a theme from the last movement of Beethoven's Fifth symphony. Did Williams steal it? Is it an homage to Beethoven? Who knows? Some may claim that Horner crosses that line by leaps and bounds, and perhaps in some cases he has. But you know what? I can't stop loving this disc if he, indeed, has--so in the end it really doesn't matter.