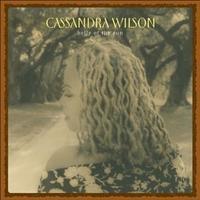 I had heard of Cassandra Wilson but didn't know anything about her music. I was noodling through itunes and noticed her cover of one of my favorite U2 songs--"Love Is Blindness." I listened to the 30-second snippet and was hooked; she had completely captured the desperate vibe of the song but through her own, very different, idiom. A few weeks later I was at the CD store and looked for the album. They didn't have it, but they did have Belly of the Sun, which I went ahead and bought, largely because of the presence of one of my favorite songs, Antonio Carlos Jobim's beautiful "Water of Life" on the tracklisting.

I'm not a huge blues fan. I like the blues enough, but not enough to, you know, actually need to go buy any blues albums. But Wilson's very distinct blend of blues and jazz is one of my favorite sounds in music--smoky and swinging, lazy and groovy. The album opens with a cover of The Band's "The Weight," and it's a great opener--moving with an easy-going shuffling gait. That "Water of Life" cover gets a little coy with a children's choir, but the call and response she plays around with with them makes the song work. I came to Wilson for her covers, but the few originals here are good, especially the melancholy "Just Another Parade." A desperate "Wichita Lineman" and a optimistic-sounding "Shelter of the Storm" (I'd love for her to do a full-on Dylan covers album) are highlights, and the last track, a down and dirty rusted rendition of what I assume to be an old blues standard, "Hot Tamales," ends things off pretty much perfectly. The middle of the album meanders a bit too much, but there are some great things here.

Until Whenever
Hand-crafted in a rough-hewn oak cabin by Tosy And Cosh at 1:54 PM

If you like "Hot Tamales", check out the bravura guitar work on Robert Johnson's version of the song.

Johnson's on my ever-expanding, seemingly never-shrinking, list of artists I really need to check out. Thanks.