Music Morsels I - A 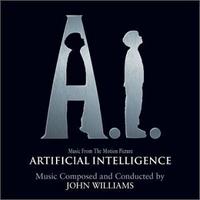 In what will (hopefully) become a recurrent feature here on Tosy and Cosh, I will be dipping into my CD collection and offering up brief reviews on selected albums. I'll start with an album from the 'A's and continue through the alphabet--eventually, I suppose, circling back to 'A.'

The first entry is for one of my favorite scores, John Williams' for the Steven Spielberg film A.I. Williams' seeming inspiration for his work on this futuristic film was to combine his romantic, epic style with the tightly controlled more evocative minimalist style of Philip Glass. It's an odd choice at first blush, and seems unworkable but in execution it works wonders. The driving action and chase themes wonderfully capture the mildly antiseptic future Spielberg (in collaboration with a post-mortem Stanley Kubrick) has imagined, and the more delicate themes surrounding the relationship between the robot and his adopted mother are delicate little chilly jewel boxes. Williams has, in a way I wouldn't have thought possible, managed to musically combine the very different artistic visions of Spielberg and Kubrick, and the result is one of his most fascinating scores. Even the near-histrionic love theme, sung by pseudo-operatic vocalist Josh Groban, manages to almost work (better than it should, at any rate).

Until Whenever
Hand-crafted in a rough-hewn oak cabin by Tosy And Cosh at 11:40 AM