More Music Meme!
Another one filched from the sword-wielding Japanese amphibian:
What was the first recorded music you bought?
Casettes to use on my brand-new Walkman - the Beverly Hills Cop soundtrack (pretty much for that awesome piece of synthesized instrumental coolness, "Axel F") and the Goonies soundtrack (can not for the life of me remember what song made me want this. Although it may well have been "Goonies (R Good Enough)" I was an odd child.
What was the last?
The soundtrack to the second season of Lost. Giacchino works wonders on that show.
What was the first "professional" music show you ever went to?
U2, Zoo TV Tour. Seventeen years old, last-minute scalped tickets, after beating the parents into submission to get them to let me and the younger sister go and getting lost on the way and almost giving up before approaching some guy selling in the larking lot, and paying way too much per. Indescribably thrilling.
What was the last?
Allmann Brothers. Went with my father last year when a guy at work offered him tickets. Not really my bag but a worthy evening just the same, if just for the experience. Guys can play, that's fo' sure.
What's your "desert island" album?
The Joshua Tree. Easy.
What's your favorite album/song title?
Album and song - All this Useless Beauty. I just love the phrase. Even wrote a short story inspired by it.
What's your favorite album art (include an image of it if you can)?
Human Wheels, John Mellencamp. It's really a lovely image, and one very appropriate to the album's themes. 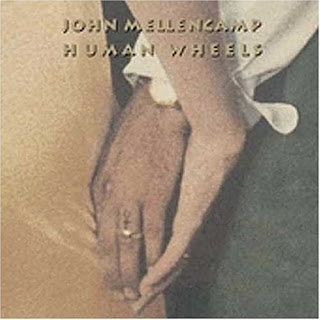 Ideal choice for a karaoke song?
Something by Dylan. Everyone thinks he can't sing, so you're not being judged too harshly.

Song you don't like that WILL NOT LEAVE YOUR HEAD if you hear it."
No one will know what I'm talking about, but there's a song, "Going on a Hayride," from a really, really low-budget, bad video my kids unfortunately love that sticks like glue.

Which is cooler? -- Vinyl? CD? Cassette? 8-track?
mp3 or other digital. I really don't notice sound quality at all unless it's really bad, so portability wins out.

Until Whenever
Hand-crafted in a rough-hewn oak cabin by Tosy And Cosh at 10:17 AM