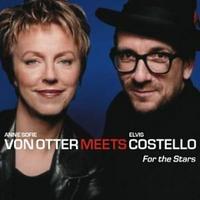 This is one of my favorite albums. An odd little duck, it's the result of Elvis Costello's being a fan of opera singer Anne Sofie Van Otter. Costello approached Van Otter about working together, and the two decided to do a pop album of covers, of songs that Costello thought Van Otter should know and would want to sing. The recipe sounds potentially ugly, and of course classical sections of music stores are littered with ill-fated attempts by classical singers to "cross-over" to more popular styles. But here, the chemistry was perfect.

Unlike many an opera singer trying to go "pop," Van Otter has a real feel for the idiom of pop singing. True, a lot of these songs sound more jazz than pop, but whatever classification you lean to, she is able to abandon the intense, full operatic sound, for a mellower, softer tone that only benefits from the perfect intonation and dictions she brings from the opera world. She really gets into the lurics too, finding the melancholy and wistfullness that feature heavily in a lot of Costello's selections. What really make sthe album, actually, is that Costello found some real gems for her to sing. In addition to doing a few of his own songs, and a few he wrote just for this disc, Costello dug up some old Tom Waits, Lennon and McCartney, and ABBA songs for Van Otter, and his taste is impeccable. Highlights include the ABBA piece, above all others--a forgotten and unknown-by-me song called "Like an Angel Passing through My Room" that ABBA-member and composer Benny Andersson plays piano on. Haunting and gorgeous. Other highlights include a Lennon and McCartney number, "For No One," and one of Costello's originals, the opener No Wonder."

Hand-crafted in a rough-hewn oak cabin by Tosy And Cosh at 11:29 AM

Hi peeps!! Christmas is in the air everyone! Get ready with your Christmas list and avoid the Christmas rush. Ows, I have just checked this cool site in town. If you need some lyrics of your fave songs, www.mylyricscentral.com is the right place to be.