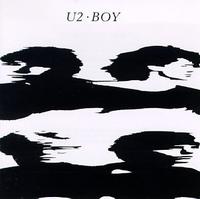 U2 is, without question or pause, my favorite band. They are the only band I've seen live multiple times, and one of only a handful of artists whose new albums I religiously will purchase on the for sale date. I have posted before about my near-religious belief that Bono is the best rock vocalist, ever, here. I have U2 bootlegs; I have no other bootlegs. I've bought scalped tickets for silly prices to see them; not so for others. So, yes, I'm a big fan. As such, I thought it might be interesting, for me if not for anyone else, to go through the U2 canon, album by album, track by track, and post my thoughts. Shall we begin?

Boy was U2's first album proper. There had been an EP in England that I honestly don't know much about, but for all intents and purposes the U2 catalog starts here. This was an album made by very young men, barely (if at all) out of their twenties, and it shows. The singing and playing is remarkably earnest, truly the work of, well, boys, and yet the four band members were already clearly on to something, with many of what would become the band's signature elements already in place--Bono's impassioned, uninhibited vocals; the Edge's ringing, minimalist guitar figures; Adam's fairly stolid bass support.


I Will Follow--The song that got the most play in later years, it was a staple of the 2000 All that You Can't Leave Behind Tour. The first song on the first album in a lot of ways defines the U2 sound. The song kicks off and is defined by an insistent, repetitive, urgent guitar riff backed by a similarly simple bass line. The bridge slows down considerably for a trance-like dreamy interlude defined by echoey guitar. The song aptly announces the album's whole theme, that of boys turning into men and the trauma encompassed within that transition, and was partly, at least, about Bono dealing with loss of his mother as a teenager.

Twilight--Moody mid-tempo number after the more straight-ahead rock of "I Will Follow." Bono's voice already exhibits that open, belty quality, but is much more stylized and affected early on. "Under shadow, boy meets man." One line to sum up the album's theme; a trick U2 would revisit on later albums.

An Cat Dubh--Gaellic for "The Black Cat" this song is driven by a great, if remarkably simple, bass line. In Bono's grunting and the keening noises added to the mix, you can hear a young band playing in the studio. The band pulled this out of decades-old mothballs on their still-going Vertigo tour. segues directly into:

Into the Heart--An early earnest U2 experiment. Almost an instrumental, the Edge attempting a lyrical guitar melody over an heartbeat of a bass line. Pretty, but slight, with lyrics that border on the mawkish.

Out of Control--An early classic, more straight-ahead rock, with a nicely propelled feeling mirroring the lyrics about the headlong chaos that adolescence can feel like.

Stories for Boys--Twisty, very un-Adam-like bass line anchoring another uptempo song. The open-ended guitar figures give the song an almost-sinister sound. The first instance of what would be many ably handled Edge backup vocals.

The Ocean--An attempt at a mood piece. A Brian Eno piece before the band met him. Bono attempts some beat-like poetry, almost spoken over the atmospheric bass and guitar. Hasn't aged well.

A Day Without Me--Classic adolescent angst. "You'll miss me if I die!" The lyric "starting a landslide in my ego" just screams teenager.

Another Time, Another Place--One of the album's more sophisticated tracks, the guitar and bass working very well together to establish a menacing mood. This track has more than stood the test of time--they could have resurrected this on tour to great effect.

Electric Co.--The other song they've been doing on tour as an homage to their very early club years. A great song, insistent and hard, almost punk-like, one of the band's better rock tracks.

Shadows and Tall Trees--An overly overt stab at being poetic--"I walk street rain tragicomedy" "Life through a window/A discolored pane/Mrs. Brown's washing/Is always the same." Still, the chorus does hint at how U2 would in the future be able to handle the kinds of grand musical statements they attempt here with limited success.

Boy is by no means the most accomplished debut album, but it is surprisingly well-formed for such a young band, and very indicative of where they would go and showing teasing hints of topics and sounds that would obsess the band for years to come.

Until Whenever
Hand-crafted in a rough-hewn oak cabin by Tosy And Cosh at 1:43 PM

I share your U2 love, but I haven't seen them live in concert yet. I'll always regret not cutting Physics to see the free concert in San Francisco.

We should exchange our U2 bootleg listings, because I would love to build my collection of some of the more recent stuff. Favorite show is still the Rosemont show from "Rock's Hottest Ticket".

Email me if your interested leftybrown AT gmail (dot) com

I'll shoot you an e-mail, but let me note that my bootleg collection is very small. The fact that I have any at all speaks to where I place the band in my personal band hierarchy.