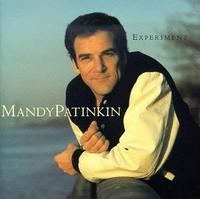 Mandy Patinkin, one of my favorite actors and singers, comes into a fair bit of criticism for a vocal approach that can often be called, charitably, wildly over the top. He possesses a big, strong voice that he can wield with pinpoint accuracy while belting to hit the rafters. It's a theatrical style, to be sure, and even this devout fan can admit that it can be, on occasion, a bit much.

Experiment, his third album, seemed designed to explicitly address this very criticism. The entire album is sung softly, crooned with gentle emotion, and not once does Patinkin unleash the roar he has become famous (infamous?) for. In fact, he sings, towards the end of the album, the mighty "Bring Him Home" from Les Miserables, a song designed to show off strong, belted high notes, as a gentle, tender ballad, hushed in solemnity. The album ostensibly tells a story through the song selections, but its charms for me have always lied in how deftly Patinkin switches from an old chestnut like "As Time Goes By" to modern Sondheim fare like "Multitudes of Amys" and make them sound as if they belong together. This, much more than his first two albums, is sonically and programmatically disciplined stuff, with one mood being sustained over the course of the whole album. The last song, the Cole Porter standard "Experiment," is one of those select few I sing to my twin girls on occasion, its message, I think, being remarkably appropriate for children.

You all have learned reliance
On the sacred teachings of science
So I hope through life you never will decline
In spite of Philistine defiance
To do what all good scientists do.

Experiment.
Make it your motto day and night.
Experiment
And it will lead you to the light.
The apple on the top of the tree
Is never to high to achieve
So take an example from Eve
Experiment

Be curious
Though interfering friends may frown
Get furious
At each attempt to hold you down
If this advice you always employ
The future can offer you infinite joy
And merriment.
Experiment
And you'll see.

Hand-crafted in a rough-hewn oak cabin by Tosy And Cosh at 1:28 PM