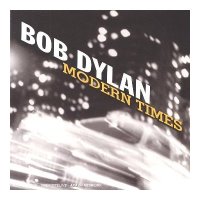 I know some comic book fans read this blog, so the following may (may) make some sense. You know the comic book trope of the hero (or villain) who is so remarkably good at what they do as to leave others - even other heroes - astonished at their sheer mastery? Think of Captain America effortlessly mowing through dozens of armed assailants in a single panel, or Bullseye effortlessly dispatching a legion of grunts with found items - that kind of thing. Other (non-comic book) examples might include a master chef assembling a meal seemingly without thinking, or the world's best juggler making juggling seem as simple as walking is to the rest of us.

This is what Bob Dylan's new album feels like. It feels so completely and utterly effortless, and yet at the same time so damn assured and perfect, that one can't help but gape in astonishment. The band is so tight, so assured, so natural, as to seem almost lazy - as if no real effort is being put forth here (when at the same time it's evident that much effort is). And the songs themselves sound like they've existed forever, as if Dylan merely plucked them from historical obscurity rather than going to the effort of writing them. (And, yes, I know that he's paying very traceable homage to some old blues standards and structures and lyrical conceits--nonetheless, this is very obviously a Dylan album, not an album of covers).

On top of that, these 1o songs represent some alchemical blend of modern and old that quite simply should not work at all. I mean, take a listen to the insouciant galloping rhythm section on the album's opener, "Thunder on the Mountain." This could be a forgotten track off of some old album from the 40s, with barrelhouse piano and upright bass anchoring the shuffling, bluesy melody. Except for the fact that the song -- especially as sung in Dylan's sly, ragged, growly voice -- sounds at the same time completely current. Or the moonlit "Spirit on the Water," which sounds like something your grandparents might have danced to, except, you know, not.

The whole album is like this, chock full of old-fashioned-sounding constructions made, by some magical means I can not fathom understanding, completely modern, even though the instrumentation and arrangements themselves could be out of pre-1950s America. Baffling.

As good as the band and songs are, the most stunning element here may well just be Dylan's singing. The voice itself is cracked, croaking, and harsh in spots, but tender and, yes, beautiful just the same. And the way he wraps that singular voice around these songs is in and of itself pure bliss. A lot of Mark Knopfler's more recent stuff has some of this old-timey feel, actually, but the difference between Knopfler's limited voice (which, like Dylan's, is not conventionally "pretty") and Dylan's masterful wielding of his is miles wide. Say what you want about tone, and purity of sound (and I have to admit to typically being a huge stickler for pop and rock singers singing well from a technical-production-of-powerful-pretty-sounds perspective), but this is master-level stuff going one here.

At this early stage (I've only listened to the album maybe 20 times or so so far) my favorite track just might be the elegiac "Workingman's Blues #2," with its quiet, relaxed beauty and lyrics like "You are dearer to me than myself/As you yourself can see" and "In the dark I hear the night birds call/I can feel a lover's breath/I sleep in the kitchen with my feet in the hall/Sleep is like a temporary death."

Or maybe it's "When the Deal Goes Down" another in Dylan's series of songs about mortality ("Knocking on Heaven's Door," "Trying to Get to Heaven Before They Close the Door," "Po' Boy"), with lyrics like: "Each invisible prayer is like a cloud in the air/Tomorrow keeps turning around/We live and we die, we know not why/But I'll be with you when the deal goes down."

OK, so I don't have a favorite yet. No matter. The truth is that I simply cannot stop listening to this album, simply cannot evade its old-new" charms. Not, mind you, that I would really want to.

Until Whenever
Hand-crafted in a rough-hewn oak cabin by Tosy And Cosh at 3:32 PM

so you liked it then?

It is great. I remarked that Dylan has been a folk singer, rocker, but I really dig him as a bluesman.

Roger - you're a librarian, aren't you? Surely a library copy could be procured?

Tosy- Not that kind of library, (i.e, not a public library), where such a purchase can be justified.

Lefty - you're right. I had no idea how Tosy felt about the album. He should be more explicit in the future.

Roger - I didn't mean that you should have your library buy one, just that as a librarian you might be able to find a library copy somewhere to borrow. I get lots of CDs from the library. Libraries are awesome.

Oh, THAT. I DO do that, but it tends to be of CDs that I've already bought on LP or cassette and don't think I ought to have to buy again.