The U2 Canon - How to Dismantle an Atomic Bomb 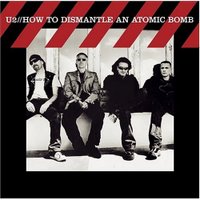 And we reach the end of the line - for now anyway. The last U2 album. Hard to believe that this is almost two years old already. The pressing question awaiting this follow-up to the critically and commercially acclaimed "return to form" of All That You Can't Leave Behind was whether or not the band would be able to replicate the success of that album. Two years later it's pretty easy to see that the answer was an unqualified "yes." How to Dismantle an Atomic Bomb received the "Album of the Year" Grammy and sold, if not in Joshua Tree numbers, extremely well, while the accompanying tour was a resounding success. In some ways, Bomb shows strong ties to its predecessor - a very "classic U2" sound married to a string of songs seemingly designed for maximum impact as singles. But the album is no mere clone of All That You Can't Leave Behind, offering a little less polish, some more pure and operatic vocals from Bono, and a couple of songs with more pure rock DNA than anything on that album. The eternal U2 theme - the conflict between faith and doubt - pops its head up a few times, but the theme is not dominant, as it was on All That You Can't Leave Behind. Instead, we get a more balanced attack, with many of the songs focused on the mystical bond that exists, not between man and God, but between man and woman.

1. "Vertigo" - The album's first single is a jolt of fresh air, anchored by a great faux-punk/garage band riff and a saucy sense of humor. I love the typical Edge solo here, with a very simple riff repeated four times, but with one small detail changed in the second and fourth repetitions. Classic Edge.

2. "Miracle Drug" - Maybe a tad overfed, this song nonetheless has a great energy and propulsiveness, as well as a topic - the miracles that science can bring to human health - that pop songs rarely broach. The line "freedom has a scent/like the top of a newborn baby's head" got mocked in some quarters, but I think it's an indelible U2 lyric - just shy of corny and somehow true.

3. "Sometimes You Can't Make It On Your Own" - Bono's moving, heartbreakingly honest musical eulogy for his late father. The vocals on the bridge - "can you hear me when I sing?" - are some of his best ever, an uncanny and remarkable mix of opera and rock. A great addition to the U2 canon.

4. "Love and Peace or Else " - I always got the feeling that the band thought a little too highly of this fine, but not earth-shattering, song. Kind of funky, with a good groove, but I never really felt it took off. The band apparently had this song kicking around for a while, with it almost making it onto a few previous albums before finally surfacing here. I'm not sure they ever got it right.

5. "City of Blinding Lights" - The album's standout, and a worthy effort at creating the kind of big, epic U2 arena rock epitomized by the immortal "Where the Streets Have No Name." It's not up to that standard, but it's damn close - that protracted opening, with the cascading piano chords and the staccato ringing guitar and the eventual climax of chords and slide guitar sound is awe-inspiring.

6. "All Because of You" - A hot and muscular bit of straight ahead rock that takes a great riff, a classic Edge up-the-scale-down-the-scale guitar figure, and God-lover ambivalence and mixes them up to perfection. I would not be surprised at all to see some harder bands cover this down the road.

7. "Man and a Woman" - A slice of sweet U2-infused soul that never takes off to the ecstatic heights it clearly wants to. A noble and worthy effort though.

8. "Crumbs from Your Table" - The anti-poverty lyric may be a tad too on-the-nose, but this remains a great song, with spare garage-band roots lifted up by a great vocal and that unique Edge sound.

9. "One Step Closer" - A vastly underrated slow moody meditation on death. I'd love to see some cabaret or jazz artist strip away the production and reveal the core of classic beauty here. The lyric's origin story is one of my favorite's - as Bono's father neared death Bono asked someone - a Ramone? - if he thought he knew if there would be an afterlife or not yet. The Ramone (?) answered, "I don't know, but he's one step closer to knowing." Bingo.

10. "Original of the Species" - A delicate and beautiful rock song about the bond between parents and children. There's a live, professionally recorded version out there somewhere that I've yet to track down featuring a full string section. I must have it.

11. "Yahweh" - The God theme returns for the capper with a wonderfully propulsive song about man's trying to live up to God's standards. I love how the melody of the main refrain - "Yah-weh/Yah-weh" - never resolves until the very end of the song, indicating that the struggle to reconcile reality with the vision of paradise God gives us can never really be resolved, that there really is no "final answer." A beautiful song.

Until Whenever
Hand-crafted in a rough-hewn oak cabin by Tosy And Cosh at 4:17 PM

My version of the album has Fast Cars on it, so it threw me for a loop for a second there.

Is it too soon to say that HTDAAB is my favorite U2 album. I love nearly all the U2 canon, but this album I can listen several times in a row, and still want to give it another go. It's refreshing to have that energy for a band after what 25-30 years?

Eagerly awaiting their next one out when? This Christmas, early next year? You know?

Sometime in 2007 if we are lucky. There have been rumblings that they've started to record a little, but nothing major, and given the slow pace U2 usually takes in the studio, I would honestly be surprised to see something before 2008. Alas. I have Fast Cars from somewhere, but not on the album. Do you have Mercy? It was going to be on the album but got pulled fairly late in the process. It's one of the best U2 tracks I've ever heard, hands-down - just really remarkable. A kind of modern-U2 Bad in structure and length.

I don't have Mercy, I'm Baptist.

Thank you I'll be here all week! Tip your waitress!

Seriously, I don't have thesong, and I'm United Methodist truth be told (and a lapsed Lutheran)