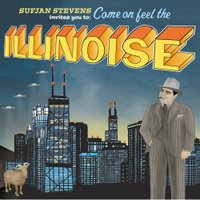 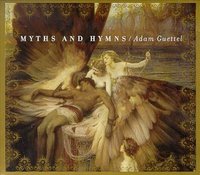 So after reading more gushing, revelatory, ecstatic raves than I care to remember (I think it was Whitney over at Pop Candy that called it the "best album of the 21st century, but maybe not) I was finally bullied into getting Sufjan Stevens' Illinoise. Popped it into the car CD player and heard the opening plaintive, Guaraldi-esque piano chords of the first song. Pretty, but simple and light in a George Winston kind of way. Effete flutes. OK. Stevens comes in and starts to sing. Pretty, I guess, but very un-noteworthy - he has a bland, thin, almost-embarrassed-to-be-singing kind of voice, like so many pop/rock singers today. As if real singing, really projecting, singing with strength and depth and color to the voice, is something to be avoided at all costs - something very, very un-cool. OK. Second track is an instrumental, a slowly building thing, kind of orchestral but not really. Bolero-like in its simple building of one theme through repetition. I was expecting more guitar, harder indie-pop stuff, but I'm liking it fine enough - although something is bugging me. Third track. Another Guaraldi-riff and then a sprightly keyboard and horns thing, with female vocalists and a larger, more expansive scope and texture. And then it hits me - what's bugging me.

I'm a fairly big musical theater fan, as any regular readers know. And what struck me, just three tracks into this heralded album, is that - while the album is good and interesting and varied and features some lovely songwriting - there is a whole host of musical theater composers who are doing similar stuff, but to exponentially less notice and general acclaim. Give Adam Guettel's song cycle Myths and Hymns a listen to see what I mean. Funky, varied, pop-type songs, with interesting instrumentation and demonstrating a host of styles - just like Illinoise. But, unlike Illinoise, Myths and Hymns (and, to name just one more example of many possible examples, Ricky Ian Gordon's song cycle Bright-Eyed Joy) features singers who can actually sing - strong, powerful, nuanced, controlled voices. And it features, yes, different and intriguing instrumentals, but instrumentals that at the same time aren't afraid of a fuller orchestral sound. Illinoise almost sounds as if Stevens had these songs and wanted to use a bigger orchestra, with more and bigger sounds available to mix with the piano-based rock/pop sound, as if he wanted to bring in real, trained voices, but was afraid it wouldn't be cool. Wouldn't be hip.

Now, I'm sure that's not what actually happened. But, listening to the album, it's what the sounds like happened. And as a big musical theater fan, it makes me, well, angry is the only way to put it. Angry that this great music, that an album of such varied and multi-hued beauty and intelligence--featuring such brilliant vocalists as Mandy Patinkin, Audra McDonald, Darius DeHaas, Theresa McCarthy--gets relatively ignored when a very similar-feeling album like Illinoise gets rapturous praise. I just wish that critics wouldn't keep so much of the musical theater stuff I like off in its own ghetto - especially when some of it is so similar in style and spirit to the stuff they love. All I can do is encourage anyone who will listen to pick up Myths and Hymns. You'll be glad you did.

Until Whenever
Hand-crafted in a rough-hewn oak cabin by Tosy And Cosh at 3:45 PM