The U2 Canon - All that You Can't Leave Behind 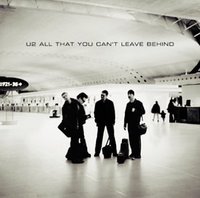 The received wisdom in the popular press and imagination on All that You Can't Leave Behind is that it was a triumphant return to form for U2 after the failed experimentation of the 90s.

Well, no. This thinking ignores that Achtung Baby was nearly as commercially successful as The Joshua Tree, and overstates the degree to which the public was turned off by Pop which by many measures, especially global ones, was pretty successful.

The received wisdom of some corners of hard-core U2 fandom is that All that You Can't Leave Behind represents a sad and tired surrender by the band, an overtly commercial retreat from the experimentation of the 90s designed to sell albums at the expense of the music.

Well, no. This thinking ignores both some of the more commercial aspects of the band's 90s output (Pop may have been experimental in a lot of ways, but, for example, "Staring at the Sun" was written and produced to be a quintessential summer pop hit) and some of the more experimental touches on the new album. "In a Little While" is the band experimenting with a stripped-down soul/blues sound just as much as "Mofo" is the band experimenting with a techno/electronica sound.

All that You Can't Leave Behind is neither revelatory nor processed pap. It's a great album that nonetheless fails to reach the inspired heights of the band's twin stabs at immortality, The Joshua Tree and Achtung Baby. And that's OK.

1. "Beautiful Day" - A top ten U2 song, and one that richly deserved all of the Grammy love it received (Record of the Year). The degree to which U2 is not a "songwriter's band" can be seen in this song's evolution--the b-side "Always" is more or less the band's first stab at "Beautiful Day," and while it's an OK pop/rock song, it has none of this song's greatness. They took it in entirely the right direction in the studio and delivered an energetic, impassioned, and forceful song defined by some well-placed piano to start and one of the three instrumentalists tightest and most well-defined rock riffs to close the thing out. A great opener.

2. "Stuck in a Moment You Can't Get Out Of" - Some very solid songwriting here--this is a song that should be covered, often and well. And another example of experimentation; the horns, the soul shadings are all U2 playing with new sounds, and creating out of them wonderful hybrids that still are unmistakably U2. Great falsetto from The Edge.

3. "Elevation" - A great live song with a stellar buzz-saw riff. Open, fun, and rocking U2 with a hint of sex.

4. "Walk On" - My third-favorite U2 song ever. (After "Where the Streets Have No Name" and "Please.") There's something about the piano that starts it and the triumphant and sad leaping guitar line that demand that the song be played at maximum volume for me. A great, impassioned vocal from Bono and some very simple but very inspiring lyrics about triumphing in the face of tyranny. I do find it amusing, though, that perhaps the song's mostly critical lyric gets obscured by sloppy scansion. At the end of the song, Bono sings, to a building, driving beat "All that you fashion, all that you make, all that you build, all that you break, all that you measure, all that you feel, all that you can leave behind." That can is the key to the lyric, contrasting the album's title and emphasizing the immateriality of our material lives. And yet the way it scans with the music, with the emphasis on the "can," it reads aurally as "can't." Nonetheless, this is a stellar, inspirational, emotional rock song.

5. "Kite" - This one-two punch kills me every time. This mid-tempo ballad, with effective slide guitar work and a classic two-chord, churning riff, is about the bonds between children and parents, and how those bonds change as children grow. "Who's to say where the wind will take you/Who's to say what it is will break you/I don't know which the way the wind will blow." And it features one of Bono's best-ever vocals, full of heartbreaking power and emotion. Listen to him on "I'm a man, I'm not a child./A man who sees the shadow behind your eyes." Powerful stuff.

6. "In a Little While" - A soulful, late-night, whiskey-soaked voiced ballad about getting ready to meet God. Deeply felt and commandingly played.

7. "Wild Honey" - Kind of a throwaway song, but a fun, acoustic-guitar driven piece nonetheless. I do wince a little at Bono's evident inability to hit certain notes the way he used to be able to--especially on the high, emotional high-point of the song, where he can't quite hit with authority the commanding high notes.

8. "Peace on Earth" - A sad, almost despondent ballad about peace. A desperate Bono asks Jesus to throw us a line, and we can hear, in the lyric and in his voice, that he doesn't really expect an answer. The themes on this album continue to hover on the balance between faith and doubt in much the same way that Pop did, and in this song we can hear the band on the far side once again.

9. "When I Look at the World" - An unjustly forgotten gem. One of Bono's best lyrics, hitting the faith angle again, with the singer admitting that he can't "look at the world" the way God/Jesus does. A perfect old-school minimalist guitar line from the Edge anchors the song and Bono just sings the hell out of it. Moving and sad, but in a high-energy impassioned way.

10. "New York" - A travelogue kind of song full of old-school Edge helicopter guitar riffs and driving rhythm work from Adam and Larry. Dark hints at infidelity keep the song from trending toward the merely descriptive.

11. "Grace" - A stately, spare closer with a beautiful lyric and a great, softly bouncing accompaniment. We hear the band take a kind of solace in coming down on the faith side of that eternal balancing act, a kind of peaceful resolution to the angst heard in, especially, "Peace on Earth" and "When I Look at the World." A wonderful way to close a misunderstood and excellent album.

Until Whenever
Hand-crafted in a rough-hewn oak cabin by Tosy And Cosh at 11:56 AM