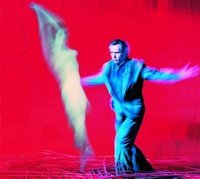 I'm not a huge Peter Gabriel fan, but I do like his music. He's one of those artists where, I have a few of their albums, like them fine, and yet really don't feel the need to get more. In Gabriel's case, I have his seminal So, which is a very good album, and his belated follow-up, Us, which is almost, but not quite, the equal of its better-known, more commercially successful, predecessor.

Us doesn't offer up as many radio-friendly breakout songs as So did--that album, with "In Your Eyes," "Sledgehammer," and "Big Time" actually featured a very respectable line-up of hits. The only Us song to really make any noise was its "Sledgehammer" parallel, "Steam," a slightly funky, upbeat number with a catchy horn figure angling its way into your ear. It's a fine song, but kind of an obviously inferior riff on its predecessor. Where the album shines is in its less overtly commercial moments, in a handful of quiet, moody, introspective songs. The highlight of these is "Washing of the Water," a slow, stately ballad with a hint of gospel to the melody that never reveals itself in the arrangement. Gabriel's singing on this track is gorgeous, passionately quiet and forceful, and featuring a blissful falsetto, and the arrangement, all slow drums and spare piano chords, supports the melody perfectly. The other standout is the equally understated "Blood of Eden," with its almost tribal drums and whispered instrumental ornamentation--the song also features some very effective female background vocals harmonizing with Gabriel on the chorus.

Us does have songs to recommend it beyond these slow ballads though. "Digging in the Dirt" is a tough, grittily sung, crunchy song with homoerotic undercurrents pulsing through; "Fourteen Black Paintings" shows off some musical thoughts and ideas brought over from Gabriel's very effective score for the film The Last Temptation of Christ; and "Kiss that Frog" is a fun, upbeat song that plays with the story of famous fable.

Grade: B
Hand-crafted in a rough-hewn oak cabin by Tosy And Cosh at 1:16 PM

Oh, you sshould try some of his early stuff. The third album (like the first two named "Peter Gabriel") features "Games without Frontiers" and the seminal "Biko", plus a lot of other good stuff. One of my desert albums.

The hit songs I know I like (Games, Solsbury Hill), so maybe I will check them out--use the library to see what I think.

Myself, on the other hand, I am a huge Peter Gabriel fan and have a lot of his cds and dvds featuring different versions of the same songs.
Blood of Eden is one of my favourites, for sure. That's what brought me to your blog, by the way. (That and google! ;D)
Anyway, try to hear some of his live performances: amazing!!!