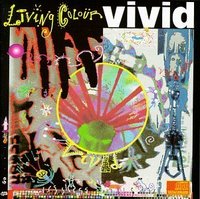 Only one choice this time out, as Vivid is the only album in my collection that starts with the letter 'V.' This was Living Colour's debut album, and it spawned their first, and to date only, hit single - "Cult of Personality." I'm not a metal fan, and a few odd things aside (some Guns 'N Roses stuff primarily), this is about as "hard" as my collection gets. Living Colour, to me, is a band that should have been better than they ended up being - the promise for more is certainly implicit in this solid, if ever-so-slightly pedestrian album. They had a solid rhythm section, a first-rate guitarist with considerable skills, both musical and technical, in Vernon Reid, and a great rock vocalist in Corey Glover. And together, they did produce some stellar rock music--see that breakout hit for a prime example. But they never quite seemed to really, or at least consistently, live up to the promise they demonstrated.

Vivid, largely on the back of "Cult," did very well, but the band's follow-up, Time's Up, stalled (ironically, that is probably the more ambitious and better album, albeit one without a song with the hook and power of "Cult"), and their third album, Stain, was pretty much a downright flop. A few years back the band reunited and put out a new album, but again, the magic was spotty, at best.

Vivid, in addition to the classic "Cult of Personality," featured a few other admirable rock songs, most notably the propulsive "Middle Man" and the high-energy thunk of "Desperate People" (a song that benefits greatly from the live treatment - as demonstrated nicely on the band's Biscuits EP). The album's one real ballad, "Broken Hearts" is a keeper, although the tender melody could have used a less mundane lyric. The band also trots out some more "gimmicky" songs, like the sly "Glamour Boys" and the band-theme song "What's Your Favorite Color?" The band would fare better with this tack on Time's Up, which features some great, soulful, melodic, fun, "gimmicky" songs - the best, and one of the band's all-time best, being "Elvis Is Dead."

P.S. - When you search for "Vivid" on Amazon, you get several, um, mature, videos from Producer Vivid Video before the album pops up.

Hand-crafted in a rough-hewn oak cabin by Tosy And Cosh at 11:15 AM

I don't have that album. But Time's Up, with Elvis Is Dead, and the librarian anthem Information Overload, I'm rather fond of.

Elvis is Dead and Love Rears Its Ugly Head are the types of songs the band should have done more of.