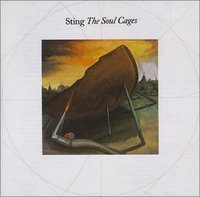 Sting gets a lot of flak. Sure, lots of rock critics and such folk give the Police some love, but to this observer, less and less as time goes by, but solo Sting tends to get degraded as a mushy, wussy, airy creator of pablum--kind of like a more hippiesh Phil Collins.

These people are wrong. Sting may not create kind of hard and fast punk/reggae nuggets of pop perfection he did when with The Police anymore, but by the end of the group's run he wasn't really either. "Wrapped around Your Finger" hardly rocks. For me, Sting's greatest strength has always been in his talents as a songwriter, in his ability to rhythmically interesting, melodically solid, and creatively harmonic songs. And to these ears, he does this with the greatest level of skill, creativity, and consistency on his third, mostly forgotten, solo album, The Soul Cages.

The Soul Cages is one of those albums that has held me pretty transfixed for years--it's one of my desert island discs. It's actually a very loose concept album, with recurring themes of the sea and of the sins passed from fathers to sons heavy throughout. I've long toyed with the idea, in fact, of trying to take the album's songs and fashion a short musical out of them--the raw material, I'm convinced, is all there. Sting wrote the album after his father's death, actually, and at the time of its release he talked about how in writing the album for the first time in his career he suffered from real writer's block. Not musically, but lyrically. When he decided to write about his father, at least opaquely, the floodgates opened.

The opening track sets the tone for the album wonderfully, a mournful tone (oboe? bass clarinet? some synth sound?) marking a slow, sad, introductory melody/fanfare. The full band comes in after with a chugging, dissonant, squeezebox of a figure, over which Sting sings the story of a shipbuilder's son fated to live the same life as his father. A great song. The album's first single, the sprightly "All this Time" follows, and it's a song that deserved more attention when it was released--bright and poppy music over some thoughtful lyrics about religion. "Father, if Jesus exists, then how come he never lived here?

Religion, specifically the struggle to believe in a world that makes belief seem illogical, is the album's other overarching theme, and it comes a capper in the album's final song, the devastating ballad "When the Angels Fall." The song is slow to the point of being funereal, with a steady, somber beat and a rich harmonic feel. Sting's singing here is mournful and sad, and yet the song ends on something of an up note, the sad, slow music eventually giving way to a happier, long outro. This is a song worth seeking out.

Other highlights include the dark jazz-funk of "Jeremiah Blues (Part 1)," the Old Testament fervor of "Mad About You," the epic, sea-logged drama of "The Wild, Wild Sea," and the churning rock of the title track.

Grade: A+
Hand-crafted in a rough-hewn oak cabin by Tosy And Cosh at 11:35 AM