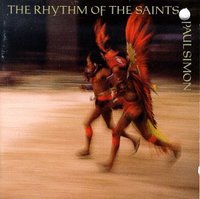 When all is said and done, Paul Simon will most likely be primarily remembered for two things: Simon & Garfunkel and Graceland. Now, Graceland is a fine album, make no mistake, but I've always had a soft spot for his follow-up album The Rhythm of the Saints. If Graceland was the sound of a sensitive singer-songwriter exploring Africa, and playing with the sounds and voices he found there in new and exciting ways, then The Rhythm of the Saints is the sound of that same singer-songwriter doing the same thing in South America. Except, as the title suggests, it was more than anything else, the rhythms of that country that he delights in playing with.

The opening track, "The Obvious Child," was the first single off the album, as well as the song he opened concerts with while touring in support of the album. As a kick-off--to album, concert, or promotional push--it's superb. The song opens with the wonderfully sharp rat-a-tat-tat of a multitude of drums, a mere forbearer of the mass of percussive sound that is to follow. The song is propelled by a chugging, celebratory percussion mix, and it is this use of percussion that makes the album stand out. There's nary a drum set in earshot as the album progresses; each song uses differing combinations of large percussion ensembles to provide the backbeat and rhythm, and when you hear the effect on Simon's thoughtful, poised songs it's enchanting. You realize how, in the end, limiting is the traditional drum set for pop and rock bands, how so many drum parts are no more than exceedingly minor variations on the same basic time-keeping beats.

The album's strengths aren't solely the result of all that percussion though; I'd say that, on the whole, the songwriting itself is stronger than on Graceland as well. Simon makes use of a hushed and evocative style throughout that the marries quite well to some of his purest and most elegant melodies. Highlights include the paranoid "Can't Run But," the ever-so-slightly impulsive "further to Fly," and the hymn-like "Born at the Right Time."

Hand-crafted in a rough-hewn oak cabin by Tosy And Cosh at 10:43 AM

Saw Simon in March 1991 - the venue was dreadful, and I was in the noisebleed seats, but it was a great show.

I saw him probably some time that summer, at the outdoor ampetheater venue in NJ. Awesome.