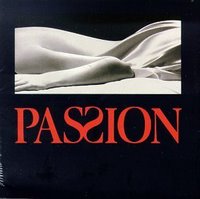 My love for Stephen Sondheim's music is no secret. And yet to date I have only seen two of his plays on Broadway (I've seen plenty others in college, regional, and community productions)--the revival of three or four years ago of Into the Woods and the original Broadway production of Passion. Actually, I saw Passion twice--it was that good. From its premiere, Passion has ignited much debate, both within the theater community at large and within the smaller community of Sondheim enthusiasts ("Sondheads") in particular.

The story (the musical is based on an Italian film and novel) is basically a reverse Beauty and the Beast. A handsome but quiet military officer named Georgio is stationed at a remote post in Italy, where a sickly and ugly woman named Fosca, cousin to his commanding officer, falls in tragic, hopeless love with him. As presented by Sondheim and book writer and director James Lapine, Fosca's love for Georgio was more a form of obsession--she stalks him to a train station, follows him incessantly, and manipulates him at every turn. What divides audiences is whether or not they believe the eventual love he returns for this demanding, selfish, sniveling creature. Many did and do not.

I do, and mainly, it must be said, because of Sondheim's ravishing score. He lets the music do a lot of the emotional heavy lifting here (indeed, the lyrics are notably simple and unadorned for Sondheim, allowing the music to, more than usual, be the focus), and the stuff he wrote is more than up to the cast. This is to me Sondheim's most ravishing, brilliant score, full of gorgeously melancholy, sweet-sad tunes and arrangements that bring the emotional core of the story to life in a way that the story, intentionally, I suspect, does not.

The score opens with, while surely not the only, perhaps the most effective musical scoring of an orgasm ever put to paper. The curtain opens on Georgio and his lover Clara (who serves as the yang to Fosca's yin in the love triangle centered in the play) in bed and, well, finishing (the Broadway production somewhat infamously featured nudity) and as the music indicates the passing of the moment, the duo begin to sing "Happiness" an ode to the love they have. We soon learn both that Clara is married and that Georgio is about to be transferred. From there, the story shifts to the remote Italian post, where Georgio meets Fosca. The song in which we meet Fosca is a sad, twisty piece entitled "I Read" in which her character is laid out for the audience very nicely. Donna Murphy's performance of this song is one of the great performances of a song in musical theater history--she's just remarkable in the role, and in the way she manages to marry very specific character voicings and phrasings with a still-gorgeous tone. Other highlights of the disc include Georgio's "I Wish That I Could Love You," a clever song in which he reads a letter to Fosca that she has written for him, and Fosca's beautiful, shining-in-its-simplicity "Loving You," in which she explains how her love for Georgio is its own thing, completely out of her control.

Hand-crafted in a rough-hewn oak cabin by Tosy And Cosh at 11:25 AM