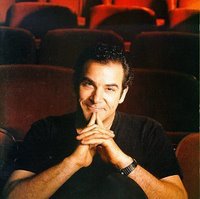 I am an unabashed, near-worshipful fan of Mandy Patinkin. I have all of his studio albums, as well as the main Broadway Cast albums he's featured in. I've seen the man in concert twice, and his is a decidedly old-fashioned, all-embracing kind of showmanship--he patters, he jokes, he teases the audience, and he belts out big, bold Broadway songs, all in a kind of minimalist setting--no backdrop or set dressing, just a piano with long-time cohort Paul Ford behind it and some flowers that he brings on with him. Patinkin's voice is a kind of acquired taste, and many hate it and its melodramatic quirks, but I find it to be a bold, strong instrument, and one which he exhibits tremendous control over. He can croon in a sweet, pure falsetto or belt with the best, and his musical tastes are choice. He's, after U2's Bono, probably my favorite singer.

Oscar & Steve, his fourth studio album, is probably his best. It's tied together by the titular songwriters--all songs are the work of either Oscar Hammerstein or his worshipful prodigy, Stephen Sondheim. Patinkin has done a ton of Sondheim over the years, appearing in his Sunday in the Park with George and the Lincoln Center Follies concert, as well as, more recently, touring with an all-Sondheim program. What this album makes clear so nicely is the connection between Sondheim and Hammerstein, the musical and lyrical evidence of the oft-repeated fact that Hammerstein mentored a youthful Sondheim.

That Patinkin should, one day, essay Sondheim's finest creation--Sweeney Todd--is a given for me. And it is this album that showed me the way. Patinkin is a tenor true, but in the last ten years or so he his voice has deepened and darkened with age. The depth and quality of his baritone range came into full evidence here--listen to the beginning of "I Wish I Could forget You" and the low G he nails with strength and rumble on "I know I've been un-KIND." Throughout this disc, Patinkin shows off this newfound range, while also providing plenty of hair-raising belts in the tenor range. He sings tenderly ("I Have the Room Above Her"), rages ("You've Got to be Taught"), spins delicate poetry ("Poems"), and raises the roof ("Beat Out Dat Rhythm on a Drum"). And all throughout he honors the simultaneously conflicting/complementary spirits of Sondheim and Hammerstein through his innate understanding and well-developed delivery of their lyrics. A great musical theater collection.

Hand-crafted in a rough-hewn oak cabin by Tosy And Cosh at 2:08 PM