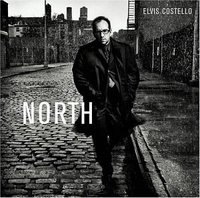 The wide range of musical styles and genres Elvis Costello has dabbled in, in addition to his core recordings of rock/pop, has been well-noted. These side projects, which have included a cycle of art songs with a string quartet, a pop album by an opera singer, and a ballet score, have received mixed reviews--some glowing some scoffing--and North, Costello's 2003 album of "original standards" was no exception. I think many of the negative reviews may have been the result of false expectations. This was an album of songs clearly written to play as old-fashioned, classic. "standards"-style pop songs, true, but Costello's intent wasn't to write an album of unforgettable, classic-style melodies. What he was after was a more personal, confessional style that in some ways combined the more tempered, unobstrusive melodies of the art song with the soft jazz style of a Gershwin or Ellington. So critics expecting an album of "new classic" melodies were disappointed.

But for what he was aiming to do, the album was a success. North was written in the wake of Costello's whirlwind romance with jazz singer Diana Krall, and the echoes of new love, and the tribute to Krall's own understated slow jazz style are unmistakable. So, while none of these songs are destined for posterity, together they form a powerful album, and one that stands as one of our better examples of the power of love to inspire an artist.

I think the weirdest thing about this album is that the title song does not appear on the album, only the accompanying DVD.

I didn't get the DVD, I don't think. This CD makes me wish that Costello would writea musical already. (Although he has written or is writing an opera, so I can't complain too much).