The U2 Canon - The Unforgettable Fire 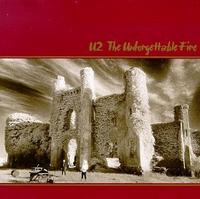 U2 takes a left turn from the more poppy, concrete structures and sounds on War and emerge with a more amorphous, atmospheric sound that has been dubbed by some as "European" to War's "American" sound. Gone are the horns and piano and in their place are synthesized strings and background synthesized wash effects. The Unforgettable Fire shows U2 getting more self-consciously arty for the first time, an angle they would continue to develop and expand upon throughout the course of their career. Those minimalist, repetitive guitar figures from the Edge return as well, more developed and less straightforward than they were on the band's first two albums. This is the album that cracked the door to the two classics that would come afterwards--1997's The Joshua Tree and 1992's Achtung Baby--considered by many to be the two really and truly great--as in "Sgt. Pepper or Highway 61 or Pet Sounds" great albums of U2's career. The sounds the band plays around with here would really become the core of those two albums, albeit in very different ways.

1. "A Sort of Homecoming"--A great, pounding, relentless, almost tribal drumbeat from Larry anchors this kick-off track, with the Edge sailing over the song from above with ringing short stabs of guitar. This song has the earmarks of a classic but never really took off. The album's glaring flaw are some very amorphous and generic lyrics from Bono, but the lyrics here are particularly strong in the way they evoke an end-of-the-world apocolyptic vision: "The wind will crack in wintertime/This bomb-blast lightning waltz/No spoken words/Just a scream." Bono continues to develop as a vocalist as well, letting loose with some unabashedly emotive high bellowed notes near the end of the song.

2. "Pride (In the Name of Love)"--One of two lasting classics spawned off of this album. The riff in this song is probably the defining riff of the Edge's career, and rightly so. It's a great figure, in the way it builds tension and yet resolves so cleanly. Bono's high notes on the chorus are still thrilling in their lack of any distancing or ironic effect--he's just singing with great open emotion. The Martin Luther King-inspired lyrics do just enough without getting overly mushy or biographical to get the point of the song across, even with the infamous "mistake." (MLK wasn't killed in the morning).

3. "Wire"--A hard-driving bit of rock after the more mellow rock of the first two numbers. One of Adam's best-ever bass lines gives this song a great propulsiveness, and the stuttering, schizophrenic guitar adds real tension. The way the song plays with the mindset of a killer, the way it tries to get into that dark space, would be a recurring thematic motif for the band, with a "dark" song or two appearing on most of their subsequent albums. And I have to once again mention how strong Bono's vocals are getting here, deep and powerful tones with a great degree of control.

4. "The Unforgettable Fire"--A rare excursion into a heavy orchestral-synth dominated sound for the band actually works very well, with a wonderfully moody vibe coming out of the music. The bridge features one of the most purely gorgeous, rangy and operatic melodies the band ever came up with "And if the mountains should crumble/Or disappear into the sea/Not a tear, no not I." And the ending, pure synth orchestra bringing the music to a natural close, is just beautiful.

5. "Promenade"--Not a great song. An attempt at hazy mood-setting with barely developed musical lines and a wash of sound obscuring the whole thing. A bit of a letdown after the great opening songs.

6. "4th of July"--A real U2 rarity, an instrumental track. Another failed experiment, ambient, slow-moving stuff with an excessively simple bass line giving the thing only the semblance of a pulse. This and the previous track really slow down the album here.

7. "Bad"--The other timeless classic off of the album. "Bad" to me always fares better live than in this studio version, but even here, the hypnotic power of the song comes through. The Edge really shines here, not with anything at all showy, but with the way that he understands that the simpleness of the guitar figure, over the course of the song, can really add up to something beautiful. This is a much longer song than your typical U2 song (over six minutes) and they handle the epic feel and flow of the piece surprisingly well, using the length very effectively to really build up to something special. A top ten U2 track.

8. "Indian Summer Sky"--After a slew of slower songs the pace is picked up again with this solid track, which nicely combines some of the synthy moodiness that permeates the whole album with a more aggressive beat. Larry and Adam really make this one work.

9. "Elvis Presley and America"--Famously improvised by Bono over a backing track the band had lying around the studio, this track is, truth be told, a bit of a mess. The music is formless and undistinguished, the vocal is lazy and slurred, and the two combine to form the less than the sum of their parts. And the lyric is pretty much just nonsense that doesn't add up to anything.

10. "MLK"--A great capper to an uneven album, with Bono reverently singing an impassioned prayer to Martin Luther King over sustained organ chords. One of those songs that shouldn't work, that should just be irredeemably cheesy, but that's in actuality very effective and haunting.

Until Whenever
Hand-crafted in a rough-hewn oak cabin by Tosy And Cosh at 10:35 AM