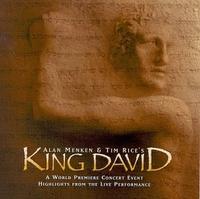 I'm an unabashed lover of the compositional work of Alan Menken. From his doo-woppy Litte Shop of Horrors score, to his Disney work, I'm, a big fan of his simple love for grand, emotional melody lines and his fierce lack of shame in being openly, well, sappy. King David was performed, to my knowledge, just once, a live recording that was captured on a now-out of print disc. The occasion was the gala opening of Disney's New Amsterdam Theater on 42nd Street in New York, the Broadway home of, since its opening, The Lion King. For the celebratory opening, Disney commissioned from Menken (who was their house composer at the time, having written the scores for The Little Mermaid, Beauty and the Beast, Aladdin, Pocahontas, The Hunchback of Notre Dame, and Hercules), an oratorio, basically, around the Biblical King David story.

The resulting piece is wonderful in the sheer amount of music it afforded. Menken's film scores for Disney tended to run at about only six songs each. His expansion of the Beauty and the Beast score for the Broadway show was satisfying, but here he had the chance to do the through-sung kind of pop opera composing that Andrew Lloyd Weber and the Les Miserables guys had had so much success with. I'd imagine that he had higher hopes for the work, that that original concert presentation would evolve into a full-fledged stage show. That never happened, and Menken's expansion of his Hunchback work into a full-length show, while enjoying a nice run in Berlin, never made it to Broadway either. With Beauty & the Beast pushing up against 12 years on Broadway, and its status as one of the longest-running shows ever pretty safe for a while, you'd think Menken would have had more stuff on the boards in the eight years since this concert, but alas it hasn't happened.

Still, this is a great score, full of stirring, juicy singing and melodies, and I am supremely grateful that it was made in the first place. Some of the material gets a little too poppy for my tastes, including some almost-embarrassing smooth jazz type stuff late in the disc, but overall this is very solid big Broadway music.

UPDATE: A little surfing reveals that the original concert was a nine-performance deal, not one, and that the Lyric Stage in Dallas performed a scaled-down version last year, and that Landmark Christian School in Newman, Georgia will be doing the oratorio in full this November.

Hand-crafted in a rough-hewn oak cabin by Tosy And Cosh at 3:26 PM