The U2 Canon - Under a Blood Red Sky 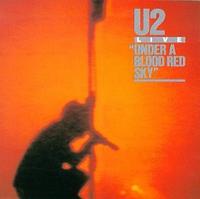 This is probably the disc that first got me into U2. It's not the disc that I fell in love with, the disc that made me a lifetime fan (that one's coming soon), but it was my first real exposure to U2. A guy who worked out in my high school gym used to play it all the time, and while I didn't love it at first, it definitely nonetheless wormed its way into my consciousness. At the time I wasn't into music at all, really, except for some now-embarrassing fondness Bon Jovi and Phil Collins and Genesis. I didn't really go back to this album and start listening to it closely and often until after the epiphany that was The Joshua Tree, and since then it's become a lesser-played U2 album for me. It still stands, though, as an excellent record of live U2 around the War era, and all of these performances are great, full of energy and passion. If you listen closely, this is also the first album where we really start to hear Bono come into his own as a vocalist, his tone deepening and strengthening and that kind of too-bare naivete you can hear in the phrasing starting to wear off. There's some great singing on this disc.

1. "Gloria" - Better than the album version, with a bit of a harder beat and a grittier vocal from Bono.

2. "11 O'Clock Tick Tock" - A B-side from Boy, I believe. It's gone on to be something of a regular live staple. Bono's vocal on the closing "Call out your name"s is great.

3. "I Will Follow" - A great live song, with that machine gun guitar and spat-out bass line really revving up the crowd.

4. "Party Girl" - Another B-side, a funky little slower number with a classic Edge screwup saved for all time in the guitar solo towards the end.

5. "Sunday Bloody Sunday" - Complete with the now-famous intro: "There's been a lot of talk about this next song, maybe too much talk. This song is not a rebel song, this song is "Sunday Bloody Sunday."" The fake ending at the end is something they'd repeat live for years, and it works great. The song really finds new life here, and Bono's vocal is much more passionate and heartfelt than on the album.

6. "The Electric Co."--This has the famous "Send in the Clowns" bit that Bono improvised while on a scaffold. The band got sued for using the copyrighted material, and the version on the CD I have is subtly cut to omit most of the "Clowns" bit.

7. "New Year's Day" - The Edge goes from guitar to piano and back and forth again seamlessly to play both parts live. Nowadays they'd just have some woman hidden under the stage playing the piano. Sigh.

8. "40"--Great concert closer, with a cleverly manipulative ending designed to have the crowd singing long after the band has left the stage. I didn't realize it until years later, but the Edge and Adam swap instruments whenever they do this song live, and did here.

Until Whenever
Hand-crafted in a rough-hewn oak cabin by Tosy And Cosh at 2:35 PM

I bought this on cassette; finally have it on CD as of this week. (We shan't say how.)

This was one of the first cassettes I ever bought, if memory serves. Wore it out pretty well, too.