Music Morsels Vol. XXIV - You're the One 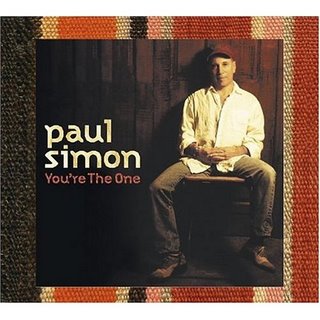 The first (but not last--the 'z' entry is similarly constrained) default choice in the "Music Morsels" series. I was actually surprised that Paul Simon's You're the One was the only album in my collection to start with the letter 'Y,' but there it is. This was Simon's post-Capeman album, and was considered to be pretty much a disappointment in most quarters, including, I suppose, these. It's not that it's a bad album, really, but it has none of the sparks generated by the "play with a very specific genre" approach Simon took with his last three albums (South African rhythms and sounds for Graceland, South American percussive elements in Rhythm of the Saints, and a compelling blend of Puerto Rican and doo-wop sounds in The Capeman). Sure, there are some nice songs here, but the overall impact of the album is soft and squishy - it's the kind of album that's easy to forget. That being said, there are some nice moments - the wry, almost-defeatist humor in "Old" is actually pretty funny (with lines like "the first time I heard Peggy Sue, I was 12 years old" set to a, yes, Buddy Holly riff). The album's one true highlight is the slow, languid "Love" and its centerpiece and chorus of a truly lovely sustained melody sung over the single syllable of the word "love."

Until Whenever
Hand-crafted in a rough-hewn oak cabin by Tosy And Cosh at 2:27 PM

Yeah, don't know why I liked, but didn't love this album, but your description seems far enough.