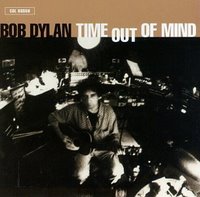 This first hit in the one-two punch of stellar late-career Bob Dylan albums is really what got me into Dylan in the first place. Its winning Album of the Year at the Grammys and the many raves I read got me, a Dylan neophyte at the time who knew basically "Like a Rolling Stone," "Blowin' in the Wind," and "The Times They Are A-Changin," to pick it up. I have to admit to needing a little time to get over the voice--at this stage in his career, it's a low, raspy, growly thing that masks much of the tone of the notes he's singing--but soon enough I was spellbound.

Since then I've gotten into Dylan in a big way, picking up fifteen more Dylan albums, with many more to go. And this is still one of the best. The ruminative, wistful quality could have easily turned into easy sentiment but Dylan keeps it easily in check. The opening track, "Love Sick," (the song used in the infamous Victoria's Secret commercial) has enough bite and edge to keep the softness at bay, but it is in the gentler songs that the album really shines. "Trying to Get to Heaven," a kind of response to his earlier "Knockin' on Heaven's Door" (here, the refrain goes "Tryin' to get to heaven before they close the door") is a standout track, a gently swinging, confident mid-tempo song about facing death. The album kind of alternates between rootsy, faster country-rock songs ("Dirt Road Blues," the heavily bluesy "Million Miles," Till I Fell in Love with You") and slower, more reflective songs that still retain a bit of that country-blues sound. One of these, "Not Dark Yet," may well be the album's highlight. A resigned, slow shuffle of a song in which we can hear Dylan wrestle with the thought of his life ending. Simply gorgeous. The album ends with a kind of homage to the epic tendencies of early Dylan - think "Desperation Row." "Highlands" is a nearly seventeen minute track in which Dylan takes his slow, sweet time, telling a long story about, among other things, a man in a diner flirting with a waitress. Here, as in the rest of the album, Dylan's vocals are simply wonderful, evocative and loose without ever losing sight of the rhythm or, really, the melodies. This is a thoughtful, wise album by an artist who's earned the right to record such a beast many times over.

Hey thanks for reminding me that I don't listen to this album enough.

Guess I'll throw it on the iPod and listen to it tomorrow at work.

Throw on Love and Theft while you're at it. Get the second punch.