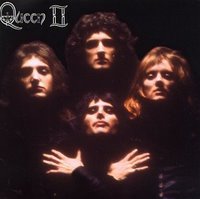 Twenty letters into the alphabet and I hit a real dry patch--the entirety of the albums whose titles begin with the letter Q in my music collection comprises Queen - Greatest Hits, Queen II, and Quadrophenia. So Queen II it is.

When I was in high school, I listened to Queen a lot more than I do today. A lot of their music hasn't held up well for me as my personal aesthetic sense in regards to music has changed. That being said, I do still like the band; I do still absolutely love some of their songs; and I do still maintain a real awe of Freddie Mercury's vocal abilities. Queen II, the band's second (duh) album, is one that's held up better for me over the years than some. As a lad I was attracted to the idea of the album as a "rock opera" of some sort--with song titles like "Ogre Battle," "White Queen (As It Began)," and "The March of the Black Queen" it seems like their should be some kind of long-form story being told through these songs. But in nearly twenty years, I've never figured out just what that story might be.

Still, there are some agreeably old-school Queen rock songs here, and much less of the cheese that would, alas, come to dominate some of the latter albums. (This was from the period when they still proudly announced that "no synthesizers were used" on their albums. ) And while I was never able to suss out a storyline, much of the material here does have a pleasantly, especially for this listener, theatrical air. My favorite track from the album is probably the aforementioned "Ogre Battle," which kicks off with one of my all-time favorite kick-ass riffs, just a frenzy of tempo and guitars. Other highlights include the madrigal-esque "Nevermore," the tongue-twisting "The Fairy Teller's Masterstroke," and the opening somberness of "Father to Son." The CD reprint I have includes a few bonus tracks, including the best, most dead-on Led Zeppelin rip-off I've ever heard-- a slow, smoldering, bluesy number called "See What a Fool I've Been."

Until Whenever
Hand-crafted in a rough-hewn oak cabin by Tosy And Cosh at 12:56 PM