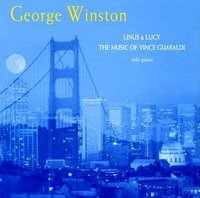 Everyone knows the Linus and Lucy theme, even if they tend to think of it as the Charlie Brown theme (people wouldn't most likely recognize the actual Charlie Brown theme), and it was probably that as much as anything else that spurred me to pick up this album of New Age pianist George Winston covering classic Vince Guaraldi tracks. But when I put the CD into my player, from the very first notes I was transfixed by a tune I had previously been unaware of, the Guaraldi classic "Cast Your Fate to the Wind."

The track starts off with a simple pulsing quarter-note figure in the left hand, a low note striking and then the octave-and-a-third higher repeating. I've since heard the original and Winston's is, as might be imagined, more serene and wistful, and less groovy, than Guaraldi's. But here especially this lighter touch works. The reading Winston gives of the song is just beautiful to my ears; this is Guraldi's best bit of songwriting and Winston runs with the structure to give us a very gentle and spare bit of melody.

"Cast Your Fate to the Wind" hooked me, but the rest of the album ain't shabby either. Here and there you can hear Winston pushing against the limits of his New Age style and, perhaps, abilities--for example, there's a moment in the famous Linus and Lucy theme, right after that famous "doo-doo-doo-doo-do-doo, doo-doo-doo-doo-do-doo opening" bit where the piano hits a staccato burst of chords and then fills in a syncopated triplet figure in the right hand before hitting the staccato part again. You probably can't place it from my poor description, but you know the part. Well, comparing Guraldi's classic original to Winston's cover you see that Winston can't quite get the jazzy rhythm of that figure; it's a bit stilted and square and not quite right.

But still, he handles a lot of these songs very, very well--especially the slower, more melody-based ones, as opposed to the swingers. The other real find for me here is the "Great Pumpkin Waltz" which may just be most accurately autumnal, melancholy piece of music I've ever heard--just rapturous.

Grade: B+
Hand-crafted in a rough-hewn oak cabin by Tosy And Cosh at 10:14 AM