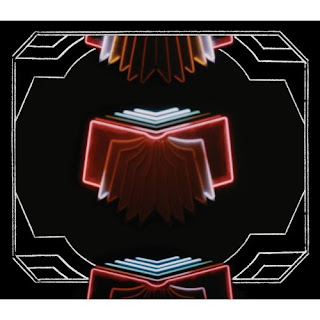 This hasn't happened in a long time. Eight years, at least, I'd say. But, there it is - I'm falling in love with a band.
A guy at work recommended I check out Arcade Fire. So I got the new album, Neon Bible, and put it on. Now, when I typically listen to music for the first time, my initial reaction is almost always within pretty narrow parameters, with "I kind of like this" and "I don't think I like this that much" representing the poles. It's only after several listens that I typically start to form strong opinions on new music. Here, as soon as I heard the opening driving, ominous piano and bass line, I was hooked.
This was last Friday, and I've probably listened to the album ten or twelve times so far (I'm listening to it now). The band sounds, to me, like a kind of inspired fusion of U2's epic, anthemic, minimalist qualities with a sunnier version of Radiohead's melodic sense, all performed by a huge band that features, in and amongst the guitar, bass, and drums, accordions, strings, and an extremely well-used pipe organ. I also love the combo of male and female voices, something that is of course quite common in musical theater but that you almost never hear in rock. And on top of all that, the ostensible lead singer, Win Butler, is that extreme rarity in rock music--a singer that actually sings. That is, he abstains from the typical indie rock choices of mumbling or speak-singing or employing thin, reedy, unsupported voices to instead sing, with power, clarity, and a lack of self-consciousness. Nice.
My next task is to get myself a copy of their first album, Funeral (Neon Bible is only their second full album). Can't wait.
Until Whenever
Hand-crafted in a rough-hewn oak cabin by Tosy And Cosh at 2:49 PM