But She Is Going. That's What Makes it Great. 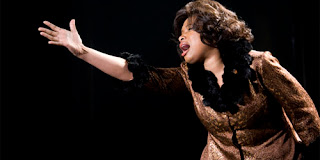 So I saw my first film in the theater since X-Men III. Yay timely cinema-going! The wife and I took in Dreamgirls last week, and, well, the magic and promise embodied in Chicago has been fulfilled, and big-time. The theater we saw the film in was maybe three-quarters full, and yet the reactions coming from that audience were louder and more appreciative than any I can remember in 30+ years of going to the movies (and until the last five years or so, a hell of a lot more than three times a year).
I've read in a few places about the oddity of applauding and cheering a film performance. The notion is that since the actor (in this case, Jennifer Hudson) can't, you know, hear the applause it's silly to provide it. Two reactions. First, the thinking ignores the reality that applause, or at least the applause in question, is not considered and deliberated. It's spontaneous. Audience members aren't thinking before they applaud, "Oh, wait, Jenifer Hudson isn't actually here," but simply reacting viscerally. It's a spontaneous reaction to a performance that has moved and thrilled - and in the context of a musical, where we are accustomed to applauding.
Second - it's easy to say that Hudson can't hear it, but reports of the wild applause she is getting, especially at the hair-raising conclusion to her already-fabled rendition of "And I Am Telling You," are certainly getting back to her, right? Can you imagine the thrill for a young actress - especially one who had a taste of fame and success only to have it prematurely taken from her by a fickle TV audience - to hear that audiences in movie theaters are screaming their love for her? When she knows full well that movie audiences almost never applaud? She must be bursting!
The other thought I had leaving the theater was that producers all over New York must be desperately tyring to finagle a Dreamgirls revival on Broadway for next season starring Hudson. I mean, it's ridiculously obvious right? If a movie theater audience - an audience that almost never applauds - is reacting like this, then how would a Broadway audience - which always applauds - react? I can't even fathom it.
Oh, by the way - what about the movie? All the good stuff you've heard. Eddie Murphy is phenomenal, and can really sing; Beyonce Knowles acquits herself beautifully in her 11 O'clock number, and the whole thing moves and pulses with a rare and thrilling - and unique to musicals - energy. Dreamgirls makes a ironclad case for the virtues a musical can bring to an audience that no other type of film can approach. I can only know hope that it does huge business, so as to keep Hollywood in the business of making musicals.
Until Whenever
Hand-crafted in a rough-hewn oak cabin by Tosy And Cosh at 11:50 AM

My review is in today's post. You are cited.