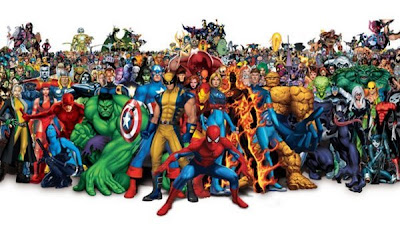 
10. Secret Wars
So contrived (infinitely powerful being shuttles major heroes off to a planet he creates so that they can fight), but it had to be done, really.

9. Armor Wars
Tony Stark finds out his tech is being used for evil and begins hunting it all down, no matter who gets hurt. Folks who found the Iron Man/Captain America stand-off in Civil War without precedent have not read this.

8. Avengers Disassembled
Bendis does a good job of destroying the Avengers.

7. Civil War
A delicious concept. The execution may have been off, but the logic was great, and the outcome was real, and is still being felt.

6. Phoenix Saga
The inspiration behind the X-Men films. Grand superhero soap operatics at their best.

5. Death of Captain America
That the title has been so good even though the title character is dead is testament to how well Brubaker has thought all this out.

4. Operation Galactic Storm
Civil War detractors take note - Iron Man and Captain America at loggerheads again. I was too young to read the Kree-Skrull war, so this Kree-Shi'ar war had to do. Grandly fun and exciting cosmic stuff.

3. Infinity Gauntlet
Exuberantly big, the overwriting and histrionics are compensated by the great one-two punch of George Perez and Ron Lim.

Until Whenever
Hand-crafted in a rough-hewn oak cabin by Tosy And Cosh at 3:21 PM

Email ThisBlogThis!Share to TwitterShare to FacebookShare to Pinterest
Labels: Comics