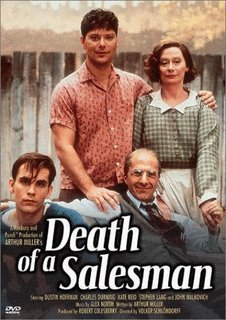 Random Top Ten!
Top Ten Plays (non-musicals)
10. M. Butterfly (David Henry Hwang) - How I wish I had had the chance to see John Lithgow in this. A tragic, sparsely beautiful play about the boundaries of love. The Crying Game before The Crying Game.
9. Deathtrap (Ira Levin) - The most ingeniously constructed play I've ever come across. Wonderfully twisty.
8. The Piano Lesson (August Wilson) - I love Wilson, and this is my favorite of his. Beautifully musical and more self-contained and tighter than much of is other work.
7. True West (Sam Shepard) - Shepard's best, a kind of duel for two intense actors. The original production starring John Malkovich and Gary Sinise is legendary.
6. Equus (Peter Schaffer) - Intense drama about a horse-obsessed teenager. Wonderfully meaty monologues abound, and the two leads (the boy and his psychiatrist) are two of the best parts in the canon.
5. Love! Valour! Compassion (Terrence McNally) - McNally's play about a group of gay friends and lovers spending three summer holiday weekends together is achingly sad and poignant, joyous and wistful.
4. Angels in America (Tony Kushner) - An epic two-parter about homosexuality, the end of the millennium politics, love, faith, and about a dozen other things.
3. Our Town (Thornton Wilder) - The quintessential school play. So simply constructed, so plain-spoken, and yet in the end such a deep well of profundity.
2. Waiting for Godot (Samuel Becket) - Has a more devastating stage direction ever been written than the famous final one here?
Vladimir: Well, shall we go?
Estragon: Yes, let's go.
They do not move.
1. Death of a Salesman - This play gets under my skin and won't get out. Worth seeking out the filmed stage version with Dustin Hoffman in the lead (and John Malkovich as Biff.
Until Whenever
Hand-crafted in a rough-hewn oak cabin by Tosy And Cosh at 4:24 PM

Email ThisBlogThis!Share to TwitterShare to FacebookShare to Pinterest
Labels: Theater