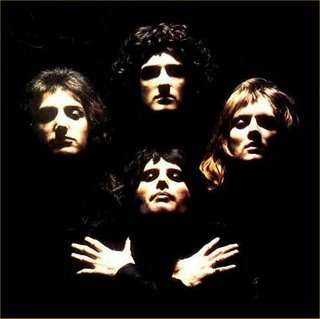 Random Top Ten!!
Top Ten Queen Songs
10. "The Prophet's Song" - A deep cut off of A Night at the Opera that indulges in a delightfully excessive multi-tracked a capella round in the middle of the song.
9. "Another One Bites the Dust" - In the top five bass lines ever, no?
8. "Who Wants to Live Forever?" - It's Queen, Broadway style!
7. "Ogre Battle" - A deep cut off of Queen II that rocks as hard as anything they've ever done, with a great speed-riff from May.
6. "Under Pressure" - Come to think of it, Queen has two songs in the top five bass lines ever.
5. "Innuendo" - A late-addition to the list of epic, somewhat schizophrenic Queen songs. A great driving synth-and-guitar riff defines the main section, while the delicate acoustic middle is highlighted by some blistering flamenco-style fretwork.
4. "Somebody to Love" - Queen-as-gospel band. Love that run at the end.
3. "We Will Rock You/We Are the Champions" - I'm actually somewhat bored by this combo by know, given how remarkably overplayed it is, but that's hardly the song's fault.
2. "Show Must Go On" - Freddie Mercury's dying wail of anger and defiance. A man who knows death is near, and singing like it.
1. "Bohemian Rhapsody" - Well, duh.
Until Whenever
Hand-crafted in a rough-hewn oak cabin by Tosy And Cosh at 12:32 PM

"Another One Bites the Dust - In the top five bass lines ever, no?
YES! Don't know Queen much, beyond the greatest hits. Your recommendation of albums would be interesting.

For my money (and I don't have all their albums, but most) A Night at the Opera and Innuendo are the two to get. A Night at the Opera was their third disc, and in addition to the now immortal Bohemian Rhapsody, it's got some real keepers. The selection is a strange mix - there's old-timey music hall-sounding things, straight-ahead dumb rock, a couple of epic songs, sweet pop, and tender ballads. Innuendo, their last album, is drenched in defiant fatality, recorded as it was deep into Mercury's illness. The could-have-been-sappy "Those Were the Days" is greatly redeemed by the knoledge that it's wistful reminisscing is that of a dying man.