Music Morsels 2 - Vol I - "All This Useless Beauty" 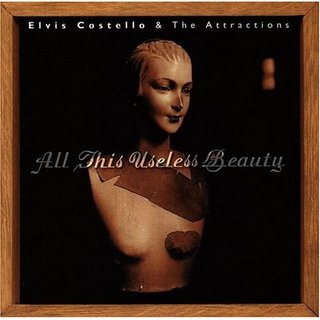 At this point in the "Music Morsels" series, I should be doing a review of an album from my collection starting with the letter 'z.' However, the only album in my collection starting with the letter 'z' is Zooropa, which I already wrote at length about in my "U2 Canon" series. So, I'm starting all over again - but instead of albums, this time, I'll be taking a longer looking at favorite songs. For the first entry of this second volume of the wildly acclaimed (giggles) Music Morsels series, I've chosen Elvis Costello's "All This Useless Beauty."

The timing here is ironic in that I just posted a short story I wrote a while back that was inspired by this song. "All This Useless Beauty" is the title song off of Costello's mid-90s All This Useless Beauty album, and it's one of my favorite Costello songs. This slow, delicate ballad is an early version of Costello in his, for lack of a better word, "standards" mode (a mode that reached its natural conclusion on his album of "new standards," North).

The song starts with a simple piano intro of spare, foundational chords under a pretty descending melody leading directly into the first verse. The addition of other instruments is subtle, with some bell-like synthesized chords coming in shortly after Costello starts singing, and the drums and bass waiting until halfway through that first verse to make an appearance. And it's not until just before Costello sings the refrain (What shall we do/what shall we do/with all this useless beauty?") that for the first time we hear a guitar.

Costello's lyric is chock-full of great lines, and does a fine job of evoking a kind of hazy, limpid fairy-tale feel at the same time as some very modern-feeling lyrics ground the song in the present: "It's at times such as this/She'd be tempted to spit/If she wasn't so ladylike/She imagines how she might have looked/Back when legends and history collide/So she looks to her prince/Finding since he's so charmingly slumped at her side/Those days are recalled on the gallery wall/And she's waiting for passion and humor to strike." It's that intertwined feel of fairy-tale and modern ennui that inspired the spare plot and structure of my story. And that refrain mentioned above has a wonderful wistful, defeated quality, both in the lyric and in the descending melody that ends in a question - the juxtaposition of the downward melody and the fact that we expect to hear a question go up in pitch is very effective.

For the second verse, the instrumentation is fuller and the arrangement has more going on, and Costello introduces a bit of a louder dynamic into his vocals, which, it should be mentioned, are very strong here--powerful and controlled. After we hear the refrain again we get into the bridge, which features the first full-on electric guitar chords, as well as some very subtle, airy background vocals.

The final verse reverts to the spare feel of the first, with the simple piano arrangement dominating. This slow down is an effective lead-in to the final rendition of the refrain, which is as powerful and dynamically strong as anything in the whole song, and which leads to a very strong ending of demonstrative piano chords that fade out to a few odd, soft, bell-like shimmering tones.

"All This Useless Beauty" is one of those songs that I expect to be covered more in the future - it's got that classic, timeless, solidly constructed feel that so many classic songs have.

Is it REALLY ironic? Or is it some sort of clever plot on your part to put together thematic posts?

Ha! I wish! No, the truth is that I'm not nearly that organized or clever. I didn't actually make the connection until I had already started the review.