Four Years of Waiting Are Over 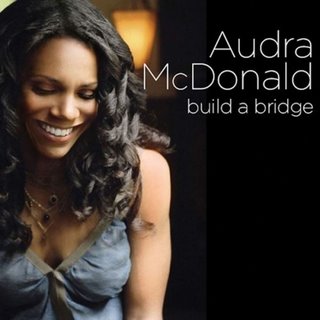 1. "God Give Me Strength" - This is one of the most gorgeous songs to be written in the last decade, just drenched in beautiful sorrow and pathos, and is probably the one song I was most curious to hear McDonald sing. The arrangement is slower and sparser than Costello and Bacharach's original, without that trademark Bacharach horn, and I have to admit to missing it a little. And yet I like that McDonald doesn't just replicate the original, that she does something new with the song. The slow, opening, with only piano for accompaniment, serves as an effective mood-setter, but I'm happy to report that McDonald unleashes some strong belting for the song's dramatic ending.

2. "My Stupid Mouth" - I actually don't know most of the songs on this album, this one included. The first notes McDonald sings are almost shocking (and dismaying), in that she's affecting that soft, almost-speaking sound so many contemporary singers employ. And yet as she progresses, she sings with a pure and gorgeous tone - and yet, remarkably, without ever losing that more casual sound, a sound wholly appropriate to this kind of music. How she does it I really can't say - it's a bit of technical prowess I can't hope to understand - but she nails it beautifully. Which is all the more amazing for how many operatically trained singers have tried to do the same and failed. I mean, most operatically trained singers who try musical theater can't get the idiom right, never mind pop music. The only other opera singer I've heard who was able to sing melodic pop songs this way, with purity of tone and yet the same kind of conversational phrasing the songs demand, is Anne Sofie Van Oter, on her For the Stars album of pop covers.


3. "Build a Bridge" - This Guettel song, which appeared in his Saturn Returns song-cycle but didn't make it onto the Myths and Hymns cast album, is quintessential Guettel - there are a few chord changes here that echo other material from Myths and Hymns. I like the song and the performance, but it does feel a little out of place. And as much as I love this album, I do wonder if McDonald wouldn't have been better served by cutting the theater music entirely and going for an album of only pop songs. I imagine part of the intent was to demonstrate how well a good contemporary pop song can sit beside a good contemporary theater song, and by limiting herself, with one exception, to songs by theater composers that aren't actually part of narrative musicals, I can see how she was aiming to stay away from that overt theatricality even more clearly. But, her admirable efforts notwithstanding, the differences between the two genres sometimes make the album feel a little schizophrenic.


4. "Cradle and All" - I had never heard this Jessica Molaskey/Ricky Ian Gordon song before and don't know the context at all, but it's a real find, with a very modern pop/theater hybrid sound. And the topic - a grown woman singing a lullaby to parents she must now care for - is little-trod ground. A sad, pretty song.


5. "I Wanna Get Married" - If the album has a "dud," this is it. Sickly-sweet ironic song about the overwhelming desire to get married, with lots of winking jabs at 50s-style traditional marriage roles. ("I wanna get married/I need to cook meals/I wanna pack cute little lunches/For my Brady bunches/And read Danielle Steele.") I get the intent, but it comes across more as arrogant and smug than anything else.


6. "Dividing Day" - This gorgeous, deeply melancholic song from the musical A Light in the Piazza gets a deeply felt reading, but the art-song-by-way-of-modern-jazz arrangement drains some of the rhythmic effects from the original, taking away some of the song's musical DNA and rendering it just a tad more generically pretty than it really is.


7. "My Heart" - This simple, but remarkably effective version of the Neil Young song is a highlight of the disc. Stately, measured, and assured - I was frankly astonished at how well a Young song transferred to this type of singing.


8. "Damned Ladies" - A flamenco-sounding piece from Rufus Wainwright. I like Wainwright, but there's nothing special here to my ears - I wish she had done "Poses."


9. "Wonderful You" - I've never heard of Kelly Williams, but this sprightly, infectious song, with its acoustic guitar-driven arrangement, is a welcome breath of fresh air on a disc that can sometimes come off as maybe a bit too moody.


10. "To a Child" - One of two Laurie Nyro covers. I'd never heard of Nyro, but this and the following song may spur me to exploring her stuff. This slow, chiming, quietly dramatic song reminds me of Burt Bacharach's pop-theatrical style, with its shifting meters and surprising chord changes.

11. "Bein' Green" - McDonald truly astonishes me on this track. For a singer with the chops she has, with the powerful, pure, strong voice she has, to sublimate that sound so well - without coming across as coy or affected - is just remarkably impressive. I mean, this is a song that was expressly written for a "non-singer" - for, in fact, a green felt Muppet. And she sings it with just the perfect balance between quiet, almost spoken understatement and true, beautiful tones. A little mini master class in and of itself. Oh - and the quiet, solo-acoustic-guitar arrangement was the exact right choice.

12. Tom Cat Goodbye" - The other Nyro track is a bit of a romp, a fast, almost (but not quite) rocking, song about a woman exacting revenge on a cheating lover. In this song, I can easily hear the blend of theatricality and pop that McDonald was drawn to, with its fast beat, pushing drums, and mix of fast and slow sections.

13. "I Think It's Going to Rain Today" - The other songwriter this disc has me itching to explore is Randy Newman. It took me a while, but I finally realized where I had heard this sad, beautiful song before - it was used in the season finale of Gilmore Girls a few seasons back, when Lorelai and Rory split. McDonald's rendition is impeccable, understated, reflective, and sung to a very effective piano-and-strings arrangement.

Until Whenever
Hand-crafted in a rough-hewn oak cabin by Tosy And Cosh at 12:02 PM

Do you mean LAURA Nyro, one of THE GREAT pop songwriters of her era? If so, you've probably heard some of her songs by other people:

She died WAY too young (without looking it up, I'm thinking at 49, about a decade ago).

Nice review. I have her first CD and should probably get this. If you want to try Randy Newman, and stay in the musical theater genre, I highly recommend his Faust.

Roger - Yes, Laura, thanks for the catch. Don't recognize any of those titles by name, but that doesn't mean I don't know the songs. Spoke to my sister, who will be lending me some Nyro - I'll filea full report. ;

Bill - I got Faust when it came out and never liked it much - haven't listened to it in years though. I don't even know if I have it anymore; if I do I'll have to give it a fresh listen.