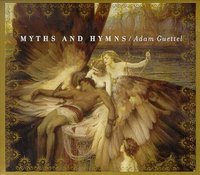 I rhapsodized here about Adam Guettel's latest theatrical score, The Light in the Piazza. Today's morsel is the cast recording of his second theatrical work, which was performed after the well-received off-Broadway and regional semi-hit Floyd Collins. Unlike Light and Floyd, Myths and Hymns was not a real musical, per se, but instead a kind of song cycle comprising theatrical songs written by Guettel around the twin themes of, well, myths and hymns. The result is a spotty, uneven piece, especially on disc, but nonetheless one that offers up some real gems.

The real highlight here is a new "hymn" of Guettel's, "Migratory V," which, with a simple yet elegant metaphor, makes a beautiful point about faith. But the real offering the song has to give is it's pure, equally simple yet achingly gorgeous melody, a tune Guettel's granddad, Richard Rodgers, would be proud of. The album features Guettel himself singing, well enough if not exceptionally, on a few tracks, including the bluesy and passionate "Saturn Returns" and the abortion mini-drama "Come to Jesus." The middle section of the album includes a few relatively straightforward musical retelling of classic myths, including "Icarus," Pegasus," and "Sisyphus." The best of these is the jazzy, funky "Icarus." Some of the musical experiments work better than others, with a gospel-inflected "There's a Shout" a particular weak point, but there's more than enough here to really admire--and in the case of "Migratory V" one song, and melody, for the ages.

Until Whenever
Hand-crafted in a rough-hewn oak cabin by Tosy And Cosh at 10:45 AM